Public Joint Stock Company Rosseti is an operator of energy grids in Russia and one of the largest electric grid companies in the world. It covers 80 regions of the Russian Federation. The company maintains 2.37 million km of power transmission lines, 517,000 substations with transformer capacity of more than 802 MVA.

In 2019, the net power supply to consumers was 763 billion kWh. The number of employees of Rosseti Group is 217,5 thousand people.

The asset portfolio of PJSC Rosseti includes 35 subsidiaries and affiliates, including 15 interregional, and the main grid company. The controlling shareholder is the state represented by the Federal Agency for State Property Management of the Russian Federation, which owns 88.04% of the share capital.

PJSC ROSSETI is a leading company in the Russian market implementing advanced technologies to the mainline and distribution power grid. The company places high emphasis on such issues as energy saving, energy efficiency, international cooperation, environmental protection and occupational safety.

Andrey Ryumin, Director General, Chairman of the Board, PJSC ROSSETI 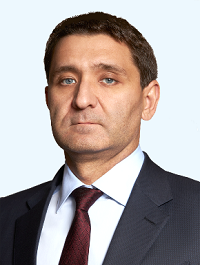 Director General and Chairman of the Management Board of ROSSETI, PJSC

In 2002, Andrey Ryumin graduated with honors from the Faculty of Mechanics and Mathematics, Lomonosov Moscow State University.

In 2004, he earned a Candidate of Science degree in Economics from the Market Economy Institute of the Russian Academy of Sciences.

In 2002–2011, he held managerial positions at leading Russian investment and industrial companies.

In 2016–2017, he was an independent director and a member of the Board of Directors of Mosenergo.

On February 12, 2021, he was appointed the Director General and Chairman of the Management Board of ROSSETI.

His awards include the Medal of the Order for Merit to the Fatherland (2nd Class) and letters of honor and gratitude from the Ministry of Energy of the Russian Federation, the Governor of Saint Petersburg, and the Governor of the Leningrad Region.