01/31/2020 Federal Grid Company first time approves typical RPC and APCS cabinet manufacturing norms FGC UES (Rosseti Group) has effected a pack of fundamental documents in the field of construction of typical complexes of relay protection and control (RPC) and automated process control systems (APCS) – 22 new corporate standards in total. This is the first time ever that a normative base like that is established in Russia, based on the family of IEC 61850 international standards.

01/28/2020 Federal Grid Company invests RUB 5.8 mn into construction of utilities to develop Malomyr and Albyn gold fields FGC UES (Rosseti Group) has finished construction of the grid infrastructure to supply power to the largest gold ore fields in the Far East, Malomyr and Albyn (Petropavlovsk Group). The new 220 kV Rudnaya 63 MVA substation and the Fevralskaya-Rudnaya 220 kV 173.6 km line up to the existing Fevralskaya 220 kV substation have been put into service. The new power facilities allow to solve the problem of capacity deficitiency in Selemdzhinsky district of the Amur region, where more than 10 thousand people live and where there is a perspective center of gold mining.

01/23/2020 Federal Grid Company implements innovative cable network protection system on Moscow Energy Ring FGC UES (Rosseti Group) has begun industrial operation of an innovative system for selective automatic reclosing of aerial cable lines (SAR ACL) in one of the sections of the Moscow Energy Ring, 500 kV Zapadnaya – Ochakovo ACL. Implementation of the innovative development increases the stability of the capital's power system as a whole, as well as the reliability of power supply to consumers in the southwestern and western districts of Moscow and the Moscow region. The system has been developed within the research and development program of FGC UES jointly with expert from the R&D Center at FGC UES and All-Russian Relay Engineering Research Institute (VNIIR, part of ABS Electro).

01/22/2020 Upgrading of 500 kV power transmission line in Tyumen region completed for development of Tobolsk – Surgut – Korotchaevo railway FGC UES (Rosseti Group) has upgraded the Magistralnaya – Nelym 500 kV power transmission line in the south of the Tyumen region. This included construction of a 500-meter aerial pass where the TL crosses the new tracks installed as part of the large-scale infrastructure project of JSCo RZD for the development of Tobolsk – Surgut – Korotchaevo railway.

01/15/2020 Federal Grid Company to provide 150 MW of power from south Russia’s biggest windfarm The first stage of connection of the Adygea windfarm, whose design capacity is 150 MW, to the Unified National Power Grid has been completed. The work has been done jointly by FGC UES (Rosseti Group) and its subsidiary, Kuban Grids. 16.5-km long feeders have been built from Armavir – Tsentralnaya 220 kV overhead transmission line. Armavir and Tsentralnaya 220 kV substations will be upgraded at the next stage. The total cost of work is 650.7 mn rubles.

01/14/2020 FGC UES shares get listed in MOEX – RSPP sustainable development indices For the first time ever, ordinary shares by FGC UES (Rosseti Group) have been listed in Moscow Exchange’s bases of MOEX – RSPP indices: "Responsibility and Transparency" and "Sustainable Development Vector". Those include securities of issuers who take the lead in assessment of ESG (Environmental, Social, and Governance) held annually by the Russian Union of Industrialists and Entrepreneurs (RSPP).

01/06/2020 Federal Grid Company gets "Leader of Environmental Activity in Russia" competition's award for the third year in a row In 2019, FGC UES (Rosseti Group) confirmed consistency of its environmental management system with ISO 14001:2015 international standard, implemented a series of measures to reduce the environmental footprint, and install over 60 thousand bird protective devices at overhead transmission lines. Innovative energy-efficient technologies were deployed at four substations. The company became an awardee of the "Leader of Environmental Activity in Russia" competition in the "Best Environmental and Energy-Saving Policy" category.

12/25/2019 Head of PJSC FGC UES Andrey Murov discussed with investors and analysts the major directions of the company's development During the annual Investor's Day, Andrey Murov, Chairman of the Management Board of PJSC FGC UES (Rosseti FGC UES), told about the fundamental results of 2019 and key areas of work for the new five-year investment period. The sustainable financial and economic indicators were noted, underlying the recommendation of the Board of Directors referring to payment of interim dividends in the amount of 11.23 billion rubles. This year, the company redeemed its first Eurobond issue for RUB 17.5 billion and was assigned higher credit ratings.

12/24/2019 Power equipment and facilities of the large power supply center of the Kola Peninsula - 330 kV Murmanskaya substation - were commissioned. The Federal Grid Company (PJSC FGC UES) commissioned and powered the first 250 MVA auto transformer with operating voltage at 330 kV Murmanskaya substation - a large power supply center of the North-West. It will set up further conditions for the development of the Murmansk Region's economy, as well as will power the Lavna coal terminal and the Oktyabrskaya Railway's traction substation Lavna, and the Construction Center for large tonnage marine facilities of NOVATEK-Murmansk, LLC. The total cost of the project is over 5 billion Rubel.

12/19/2019 First stage of comprehensive upgrade of Domodedovo main power center, Pakhra 500 kV substation, is complete FGC UES (Rosseti Group) has energized the first set of equipment for the total capacity of 500 MVA at the Pakhra 500 kV substation. The cost of work was 5.4 bn rubles, considering the design of next stages of the comprehensive upgrade. The facility will be finalized in 2022, with another 1.2k MVA transformer capacity planned for commissioning. This will provide additional conditions for developing the Domodedovo district in the Moscow region, where about 180 thousand people live and the cognominal international airport is situated.

12/18/2019 Rosseti FGC UES commissions Ust-Kut 500 kV and Sukhoy Log 220 kV substations – final links of Peleduy Energy Ring FGC UES (Rosseti Group) has completed the construction of the first main substations in the Irkutsk region. Commissioning of Ust-Kut 500 kV and Sukhoy Log 220 kV substations was the final stage in creating the Peleduy energy ring that encompasses the Irkutsk region, the Transbaikal Territory, and the Republics of Sakha (Yakutia) and Buryatia. Yuri Manevich, Deputy Minister of Energy of the Russian Federation; Pavel Livinsky, General Director of Rosseti; and Andrey Murov, Chairman of the Board of FGC UES, took part in the startup ceremony.

12/13/2019 Federal Grid Company is honored by Russian Ministry of Energy for contributing to popularization of FEC FGC UES (Rosseti Group) received commendation from the Russian Ministry of Energy for its contribution to the popularization of the fuel and energy complex and engineering education. The awarding ceremony took place on the fields of the CASE-IN Championship Autumn Cup finals. Also during the event, representatives of agencies and industry companies discussed joint work with young people in 2020.

12/11/2019 Andrey Murov holds meeting on deliverables of Russian National Committee of CIGRE In 2019, Russia was still the first in Europe and the fifth in the world in terms of the number of members of its National Committee of CIGRE, the largest scientific and technical association in the power industry. RNC CIGRE has successfully held a joint meeting of the highest governing bodies of the organization in Saint Petersburg, a panel session within the framework of the REW Forum, and scientific and technical exchange events with the participation of experts from the CIS, EU and China. The results of RNC CIGRE work and main tasks were discussed at the meeting held by the Head of the Committee, Chairman of the Board of FGC UES (Rosseti Group) Andrey Murov.

11/27/2019 Federal Grid Company Announces EGM and Recommends 9M 2019 Dividends Federal Grid Company of Unified Energy System ("Federal Grid Company" or "the Company"; Moscow Exchange, LSE: FEES), part of PJSC ROSSETI Group of Companies, owner and operator of the Unified National Electricity Grid (“UNEG”), announces that its Board of Directors has set the date for the Extraordinary General Meeting (EGM), which will be held on December 30, 2019 in the form of absentee voting.

11/20/2019 Overhead line of Surgutskaya GRES-2, Russia's largest thermal power plant, is through with the first stage of upgrade FGC UES (Rosseti Group) has completed the first stage of upgrade of the 199-km Surgutskaya GRES-2 – Sibirskaya 500 kV overhead line. Higher reliability is achieved for the transit facility that delivers electricity to consumers in the eastern regions of the Khanty-Mansiysk Autonomous District – Yugra, including Rosneft Oil Company and SIBUR Holding enterprises. 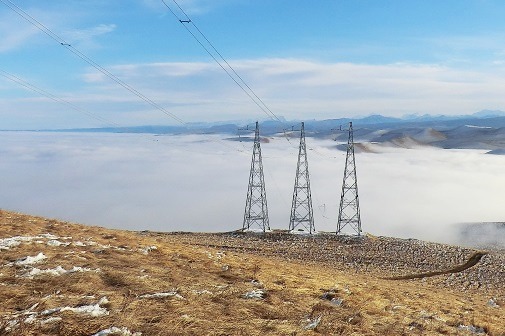 11/15/2019 Federal Grid Company gets certificate of readiness for 2019/2020 heating season The order has been signed by the Russian Ministry of Energy. The document confirms full readiness for the forthcoming maximum loading of facilities of the Unified National Power Grid managed by FGC UES (Rosseti Group) in all 79 regions of its footprint. In the run-up to winter (in 10 months of 2019), the accident rate in the UNPG became 14% lower. All plans of the repair program were fulfilled.

11/12/2019 Federal Grid Company's R&D Center will take part in ITER international thermonuclear reactor project Research and development center at FGC UES (Rosseti Group) will test the electrical connector, one of the intra-chamber parts of the experimental thermonuclear reactor that is being created within the ITER international project. The work has been ordered by Project Center ITER (part of Rosatom State Corporation). The tests will be completed in 2020.

11/08/2019 Russian Engineering Union's commission discusses measures to boost energy-efficient projects A meeting of the commission of the Russian Engineering Union on the development and implementation of energy efficiency and energy saving technologies was held in Moscow under the chairmanship of the head of FGC UES Andrey Murov. The issues of improving the regulatory framework, financing energy-efficient projects and developing specialized educational programs were discussed.

11/06/2019 Federal Grid Company to funnel RUB 1.5bn to totally revamp Khakassia's power supply hub FGC UES (Rosseti Group) has started the total revamping of the Teya 220 kV substation in the Republic of Khakassia. The utility's equipment will be fully renovated. This will significantly improve the reliability of power supply to consumers in the Askiz district of the republic, where about 40,000 people live and the Teya Sports Training Center, a training base for the Russian national skiing teams, is located. It will also be possible to connect a new 315-kilometer transit, which will strengthen the links between the region's power system and the Kemerovo region.